First, no matter what anyone says, you deserve that vacation. Shush, I don’t think you need to go on that vacation you have been planning for the past months.

Philadelphia is known for many things, from Tom Hank’s movie of the same name to the steps of the Philadelphia Museum of Art that have forever etched themselves into everyone’s minds, thanks to the movie Rocky starring Sylvester Stallone.

The largest city in all of Pennslyvania, Philadelphia has a lot going on, be it its art, culture, history, iconic buildings, several notable sites featured in the American Revolution, the Independence Hall, the Liberty Bell, etc.

Now that we’re more than a handful of places in Philadelphia where you can go sightseeing let me introduce the selling point of why you should plan to go to Philadelphia.

The W in Philadelphia has our hearts for being one of the top-rated hotels in this vast city, sprawling an impressive area of three hundred and sixty-seven kilometers square and housing over sixteen lakh lucky individuals. While this beautiful city is sprinkled with several notable hotels, the W Hotel takes the cake with its sprawling gardens, cozy spots, and extravagant pools to soak yourself in. It is the new W Hotel situated in this beautiful city. 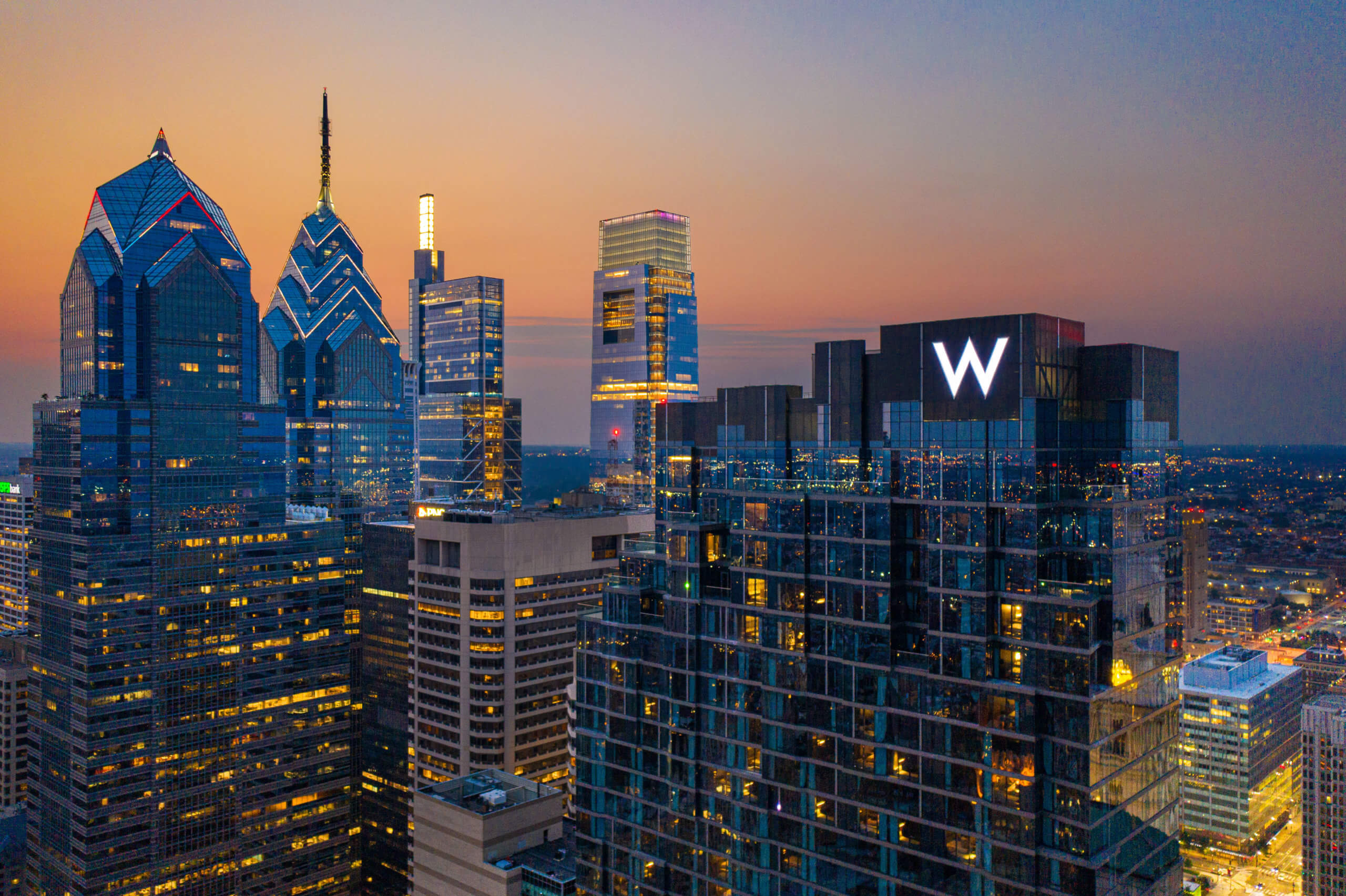 The W Hotel Philly is a luxury hotel set in the heart of Philadelphia. This amazing hotel is set overlooking the downtown cityscape. The W Hotel & Element by Westin Philadelphia boasts belonging to the Marriott Group of Hotels.

Owning a provocative design that aims to capture and capture it does. This bold architecture defies the norm and expectations, giving people a boutique W element in Philadelphia, with an aura around it that oozes confidence, energy, and the tiniest smidge of playful irreverence.

The new W Hotel Philadelphia is a part of the Marriott Internation, which unveiled the W element Philadelphia, a two hundred and eighty million dollars dual-brand project. This marvel forms a fifty-one-story skyscraper that would forever be part of the Philadelphia cityscape.

What the W Hotel & Element by Westin Philadelphia Possesses 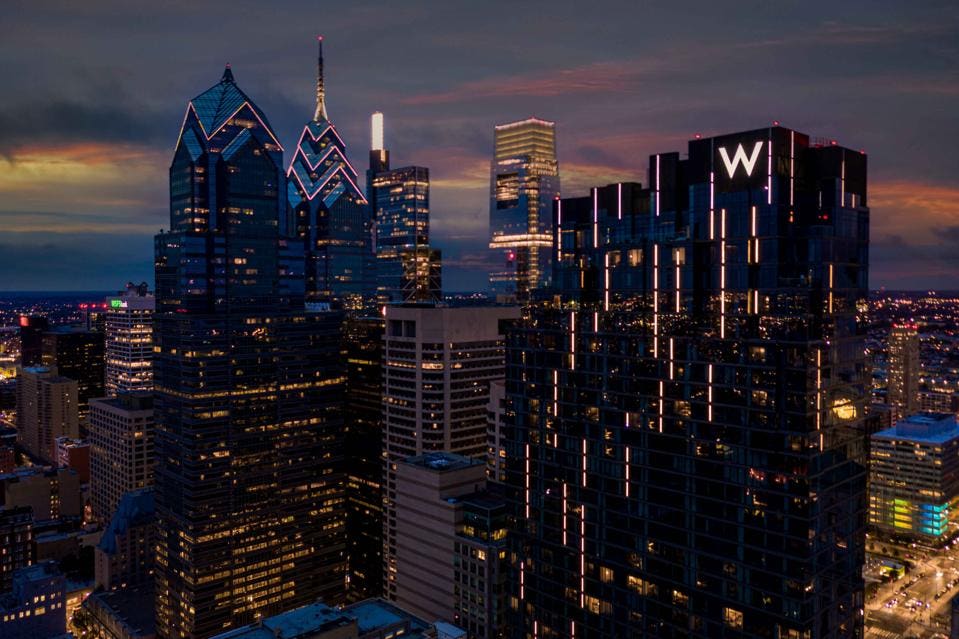 The first eight floors of the new W Hotel Philadelphia consist of a mix of the W Element Hotel and W Philadelphia’s rooms. Floors nine through thirty-one house the Element Hotel that opened in the May of 2021. Floors thirty-two to forty-nine are filled with the W Hotel downtown Philadelphia rooms. The Cheston Development owns this two hundred and eighty million dollar project.

The W Element Hotel is claimed to have been designed to evoke the bustling city’s rich historical practices, such as its musical legacy, street art, and surmountable history. It is a tribute to the Pennsylvanian traditional craftsmanship carved into every single entryway of its grand guestrooms and the tile patterns featured in the bathroom. You can also see it in the Shaker-style chairs they like to use.

Moreover, the words that make up the Declaration of Independence can be seen in graffiti font in each room on a customized light fixture. How cool is that?

Even the bed in their two hundred and ninety-five odd guestrooms features the W signature bedspread with the Philly Toile print in each room. They are dedicated.

Gifted with Chesterfield-styled furnishings, the hotel has six different suite categories, which come with private guest balconies. The salon displays lovely local artwork collected under the theme Collective Independence. This place also has custom billiard tables and foosball in their Wow and Extreme Wow Suites. This also comes in DJ booths. Oh, they also have the perfect oversized soaking tubs that no one doesn’t want to spend their lives in.

The W Hotel Philadelphia pa takes its design from various sports, such as the Hyrtl Skull Collection from the Mutter Museum, which houses an entire wall of hand-painted skulls, ceramic ones, do not worry your heads. It also draws its artistic vision from Fairmount Park’s famed sunken gardens. This nods to the Hollywood and Philadelphia royalty, celebrating them via art. It was hard to resist.

The coveted main restaurant of the hotel is responsible for many noteworthy W Hotel Philadelphia reviews. Called the Dolce, this restaurant was raised by LDV Hospitality. With the idea to represent the Rome of the 1960s, the color palette of this property’s spa is from the movie Marie Antoinette by the one and only Sofia Coppola.

The Philadelphia Element Hotel’s seventh floor hosts the Wet Deck. as the name suggests, the Wet Deck is the pool’s name. Ingenious. This is a year-long, heated pool that features themed blue and green tiles customized. These large-scale tiles cover every inch from the ceiling to the floor. The tilework is accredited to the French parterre pattern. The bar is by the pool because of a bar by the pool that contains a pixelated floral motif.

Spread over thousands of square feet, the Philadelphia hotel contains everything from meeting rooms to an alcove seating set under the staircases, thirty-seven meeting rooms, a display of skulls, spas, a restaurant, and everything else you can imagine.

Visit These Websites For The Best Adventure Travel Ideas

Visit These Websites For The Best Adventure Travel Ideas